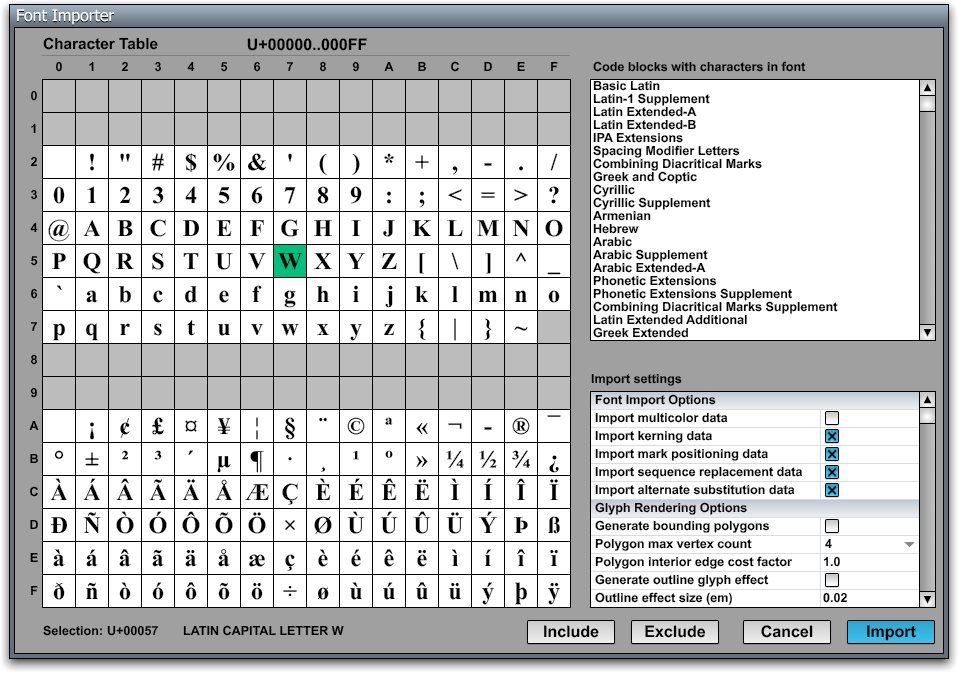 In most types of applications, text is rendered into a 2D drawing context by the operating system using the information stored in OpenType or TrueType font files. However, this method of text rendering is not compatible with hardware-accelerated 3D graphics, and it suffers from inconsistencies among different platforms. In order to render high-quality text in a 3D environment and produce exactly the same results on all platforms, the C4 Engine uses its own internal font format.

The C4 Engine can render text from all planes containing characters currently defined by the Unicode Standard. The engine always stores and processes strings using the UTF-8 encoding to provide full compatibility with ordinary ASCII strings.

To generate a font, either select Import Font from the C4 Menu or type ifont in the Command Console. The Font Importer will then display a dialog allowing you to pick a .ttf file from inside the Import folder. Once you have chosen the font that you want to import, the main Font Importer window will appear. The layout of this window is shown in the Figure 1.

You can navigate among the available code pages by pressing the Page Up and Page Down keys. Unless a setting has the keyboard focus, the Left Arrow and Right Arrow keys also navigate to the previous and next code pages, respectively. Clicking on a code block name in the block list will cause the first page covered by the block to be shown if you are not already viewing a page that intersects the block's Unicode range.

Typing Ctrl-C while characters are selected causes those characters to be copied to the clipboard.

By default, only Unicode ranges U+0020..U+007E and U+00A0..U+00FF are included, and the rest of the font is excluded. These ranges correspond to the Basic Latin and Latin-1 Supplement code blocks in the Unicode Standard. The Basic Latin block cannot be excluded—it is always part of the generated font resource.

If an attempt is made to render a character that was not imported (or didn't exist in the original font at all), then the missing character symbol is rendered in its place. This is usually a rectangular box.