The World Editor tool module is used to create every scene that the C4 Engine displays (however, scene data may be imported from other sources.) All of the data describing a world is stored in a world resource having the .wld extension, and world resources are stored in subfolders of the Data directory.

The World Editor is opened by selecting New World or Open World from the C4 Menu, or by typing world [name] in the Command Console. If the Open World menu item is selected (or name is omitted from the console command), then a dialog appears to let you select a world resource. You can also start the World Editor by using the shortcut Ctrl-O to open a world or the shortcut Ctrl-N to create a new world while any GUI window is open.

The World Editor has the layout shown below. Most of the window is occupied by one to four viewports that display the world being edited. Across the top of the World Editor are a number of icon buttons that have various functions. Along the left side of the World Editor are a set of “tool pages” that hold various groups of related tools used for a large variety of tasks such as creating geometries and applying physics. The tool pages are organized into five groups corresponding to broad types of functionality. See World Editor Pages for more information about these tools. 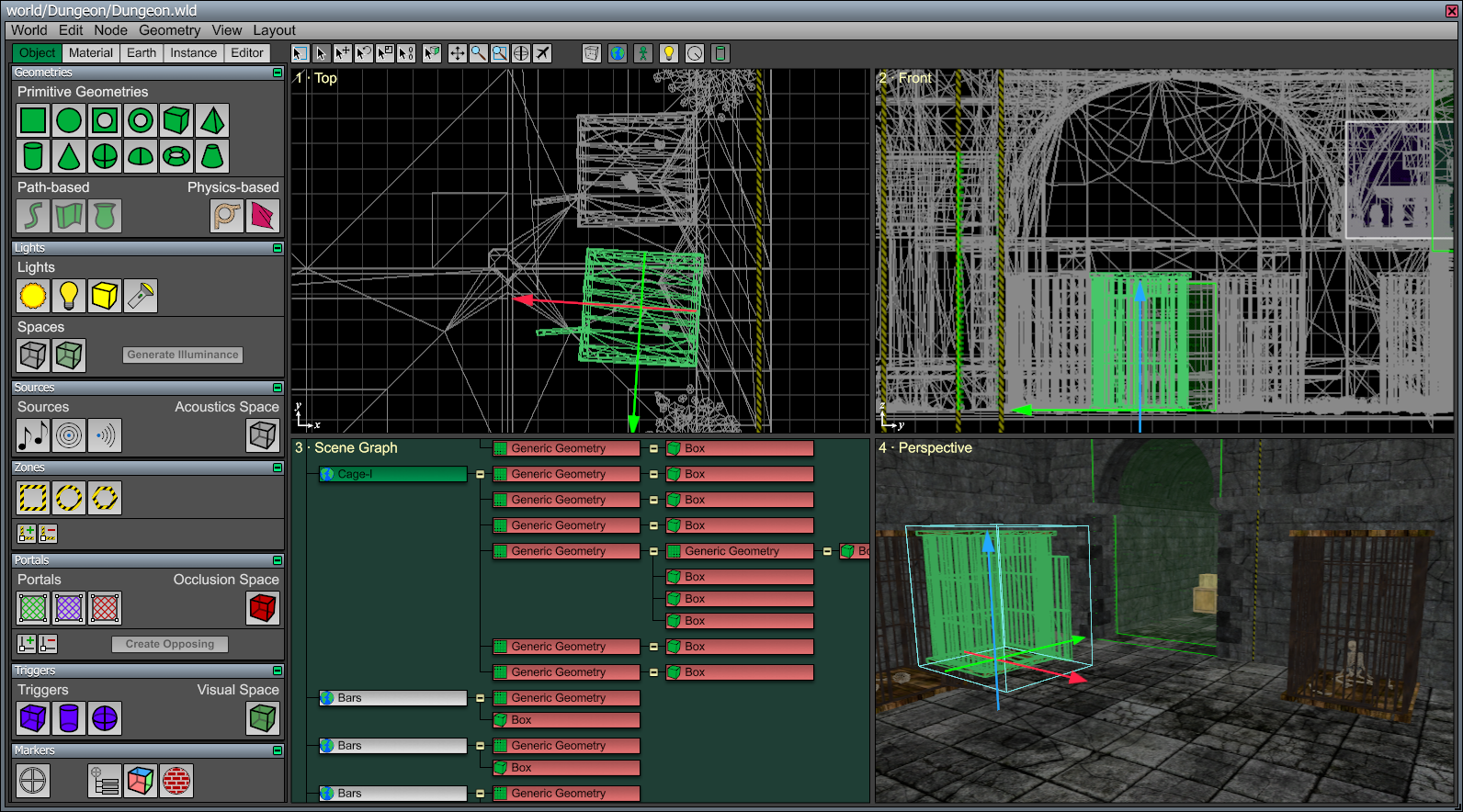 The toggle buttons all have corresponding items in the Layout menu.

The World Editor displays one to four viewports at a time, but manages eight separate viewports internally. The visual configuration of the viewports can be changed using the buttons in the Viewports Page. The eight viewports are the four quarter-size viewports and the four half-size viewports (two horizontal and two vertical) of which at most four are shown in any multi-viewport configuration. Any viewport can be shown by itself at full size by typing Ctrl-n (or Cmd-n on the Mac), where n is a number between 1 and 8, or by selecting it from the Layout menu. Typing Ctrl-n again when viewport n is shown at full size returns to the previous multi-viewport configuration.

There are three types of viewports: orthographic, perspective, and scene graph. Orthographic viewports can display the scene from one of six directions corresponding to the positive and negative x, y, and z axes. The type of each viewport can be changed by right-clicking in a viewport (or Ctrl-clicking on the Mac) and selecting a new viewport type from the popup menu that appears.

The scene graph viewport is a special viewport that displays the scene hierarchy. All of the nodes in the scene are displayed in a tree that represents the actual structure of the scene. Subtrees can be collapsed or expanded by clicking on the collapse boxes between the various levels of the hierarchy. In a scene graph viewport, the Select and Move tool provides the capability to reparent nodes. The currently selected nodes can be reparented by dragging them to another node that will serve as the new parent. (Nodes cannot be reparented to any of their descendants.)

Worlds are divided into sections called zones, and zones are connected by portals. Zones can be hierarchically organized, and the root node of every world is an InfiniteZone node. Zones are displayed in the World Editor with a black and yellow cross-hatched boundary.

Most of the time, you want to place new nodes in the infinite zone. The infinite zone can be made the current target zone by choosing Set Infinite Target Zone from the Node menu, which has the shortcut Ctrl-Y.

The gizmo is a control that appears for one of the selected nodes. It shows the orientation of the node's local axes in red, green, and blue for the x, y, and z directions, respectively.

When the Select and Move tool is in use, the arrowheads on the axes can be dragged in any viewport to move the node along the corresponding direction. Boxes also appear where the gizmo axes cross, and dragging these causes the node to be moved in a plane.

When the Select and Rotate tool is in use, circular arcs appear between the gizmo's axes, and dragging along these causes the node to be rotated in a plane.