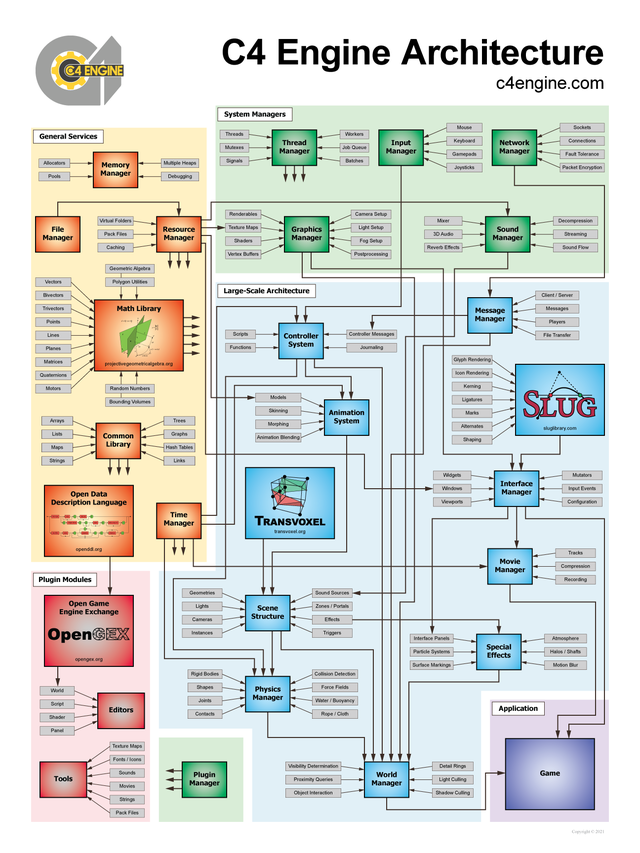 The main parts of the C4 Engine are made up of a collection of managers, each of which provides a specific type of functionality. The managers are arranged in a layered architecture as shown in Figure 1. (Click on the caption for a larger image.) Managers providing high-level functionality depend on other managers that provide low-level functionality. The lowest level managers are the only parts of the engine that interact directly with the operating system, and the layers above them are completely platform independent.

The low-level managers include the Sound Manager, the Network Manager, and the Input Manager. These managers utilize the lightest-weight interfaces for audio, networking, and input devices available on each platform supported by the engine. A platform-neutral API is then provided to the rest of the engine and to the game code. The engine also provides many low-level services that are platform-independent, and these include a containers library, math library, and built-in support for the Open Data Description Language (OpenDDL).

Specific applications and tools are built as dynamic-link libraries (DLLs) that are separate from the C4 Engine and loaded as plugins. This separation between the main engine module and other modules cleanly isolates the application-independent code in the engine. It also allows an application or tool to be rebuilt without having to recompile the engine. When the C4 Engine is run, it loads at most one application module and any number of tool modules.

The C4 Engine ships with several plugins that provide specific tools for building games. The largest plugin module is the World Editor, which is used to construct levels in a development environment that runs on top of the engine's own user interface system. The editor itself supports plugins, and one type of plugin is an importer that can bring in modeling data from external sources. The preferred format used by the World Editor is the Open Game Engine Exchange (OpenGEX) format, but the editor also includes a plugin that can read Collada files.

A single scene that can be rendered in the C4 Engine is called a world and is represented by the World class. All of the items in a world are organized into a scene graph having a tree structure, and each node of this tree represents a single item. The C4 Engine defines a class called Node that serves as the base class for a large hierarchy of different classes used to represent a variety of different types of objects in the scene graph. Some examples of various node types and their associated classes are listed below.

There are a number of auxiliary data structures that can be referenced by any particular node. For most types of nodes, there are corresponding types of objects. A node can reference only one object corresponding to its primary type (some types of nodes also reference additional special objects), but an object can be referenced by an unlimited number of nodes. This is how data instancing works in the C4 Engine. All instance-specific information (such as a transform) is stored in a Node subclass, and all information that is shared among all instances is stored in an Object subclass. The hierarchy of object classes is similar to that of nodes.

A node may have any number of properties attached to it that define any special characteristics that the node possesses. There are a few property classes built into the core engine, but most properties are defined by an application. A single subclass of the Property class can hold any amount of information, and an application can define a user interface for adjusting this information in the World Editor.