There are two ways to create materials in the C4 Engine. The first method is to simply configure a set of predefined attributes in the Material Editor. This is the easiest and fastest way to create a new material, and most ordinary materials can be made using only those attributes. A more advanced method is to use the Shader Editor to define the exact calculations used by the engine to render a material. The Shader Editor provides you with the power to create a limitless variety of materials within the context of a graphical interface. 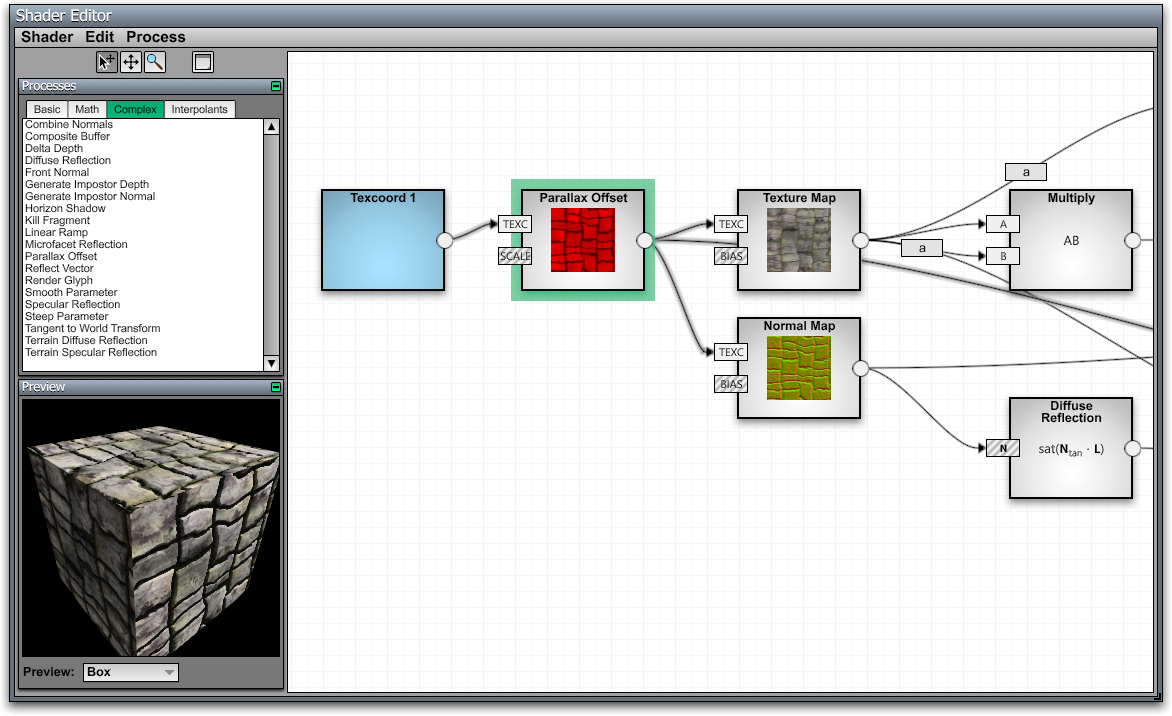 A shader is represented in the Shader Editor by what is known as a data flow graph. The nodes in this graph are called processes, and the edges in this graph are called routes. A shader is a special type of graph called a directed acyclic graph, or DAG, meaning that data flows in a specific direction from one process to another and there are no loops.

Each box in the shader graph represents a single process. A process can be a simple mathematical operation, a constant input value such as a color, an interpolated value such as the direction to the light source, or a more complex operation defined by the engine such as a parallax offset calculation.

A route is a directed edge shown as a curve with an arrowhead at one end, and it represents the flow of data from one process to another. Routes begin at one process and end at a port belonging to another process. Every process has between zero and four ports, and each can be occupied by only one incoming route at a time. Ports with a plain background are required, and ports with a striped background are optional. All required ports must have an incoming route attached to them in order for the shader to be valid.

The tabbed lists on the left side of the Shader Editor show the processes that are available for use in a shader. They are divided into four categories that are described in more detail below: Basic, Math, Complex, and Interpolants. A new process is added to a shader by selecting it in the list and then clicking in the viewport. The editor won't let you place two processes on top of each other, and the cursor will change to indicate where it's possible to place a new process.

Routes are added to a shader by clicking inside the circle on the right side of a process and dragging into a port belonging to another process. This causes a new route to be created beginning at the process you clicked on and ending at the input port to which you dragged. If a port is already occupied by another route, then the existing route is deleted and replaced with the new route that you are creating. You cannot connect a route from one process to a port belonging to any other process preceding that process in the graph because it would create a cycle.

The physical position of a process in the viewport is irrelevant. The data flow structure of a shader is determined entirely by the route connections. Processes may be placed in any convenient location.

A process takes between zero and four inputs and produces at most a single output. The output may be sent to any number of input ports for other processes.

For many types of processes, the process box shown in the Shader Editor displays additional information. For example, the Texture Map process shows a small image of the texture map, and the Constant Vector process shows the four constant values that it outputs. Most mathematical operations display a mathematical expression showing exactly how their input values are used to calculate an output value.

Each type of process available for use in a shader is described individually on the following pages (corresponding to the groups displayed in the Shader Editor):

The routes in a shader graph carry data from one process to another. Each route can carry between one and four floating-point values—the actual number is determined by the output size of the route's start process.

A swizzle and negation may be applied to a route. These can be set by double-clicking on a route or by selecting a route and typing Ctrl-I. By default, the swizzle for a route is xyzw, meaning that there is no change to the order of the components. If any other swizzle is specified, or the values are negated, then that information is displayed in a small box at the center of the path representing the route. The swizzle may be specified using any letters from the sets xyzw, rgba, or stpq. Specifying only a single letter is shorthand for the same letter repeated four times. For example, the swizzle z is equivalent to the swizzle zzzz.

If a route carries fewer than four components, then each component specified in its swizzle is clamped to the last available component. For example, if a route carries only three components, then any w, a, or q in the swizzle ultimately interpreted as the third component of the data carried by the route. The swizzle wxyz would really mean zxyz. This is particularly important in the case that two routes of different sizes are used as inputs to a binary operation. The operation is performed using the number of components for larger of the two routes, so the missing components of the smaller route are taken from the components specified by the clamped swizzle.

There are four tool buttons in the upper-left corner of the Shader Editor window, and they have the following uses. In addition to clicking on the tool button, each of these tools can also be selected by pressing the shortcut number key as shown in the table. (The shortcuts were chosen to be the same as the corresponding tools in the World Editor.)

Each shader graph contains a set of output processes that represent the final values produced by the shader. These are colored green in the shader editor, they cannot be deleted, and they can have no output routes. The only output process that has a required input port is the Ambient Reflection Output process. All other output processes have only optional input ports and are ignored if they are not used.

The individual output processes are described in the following table.