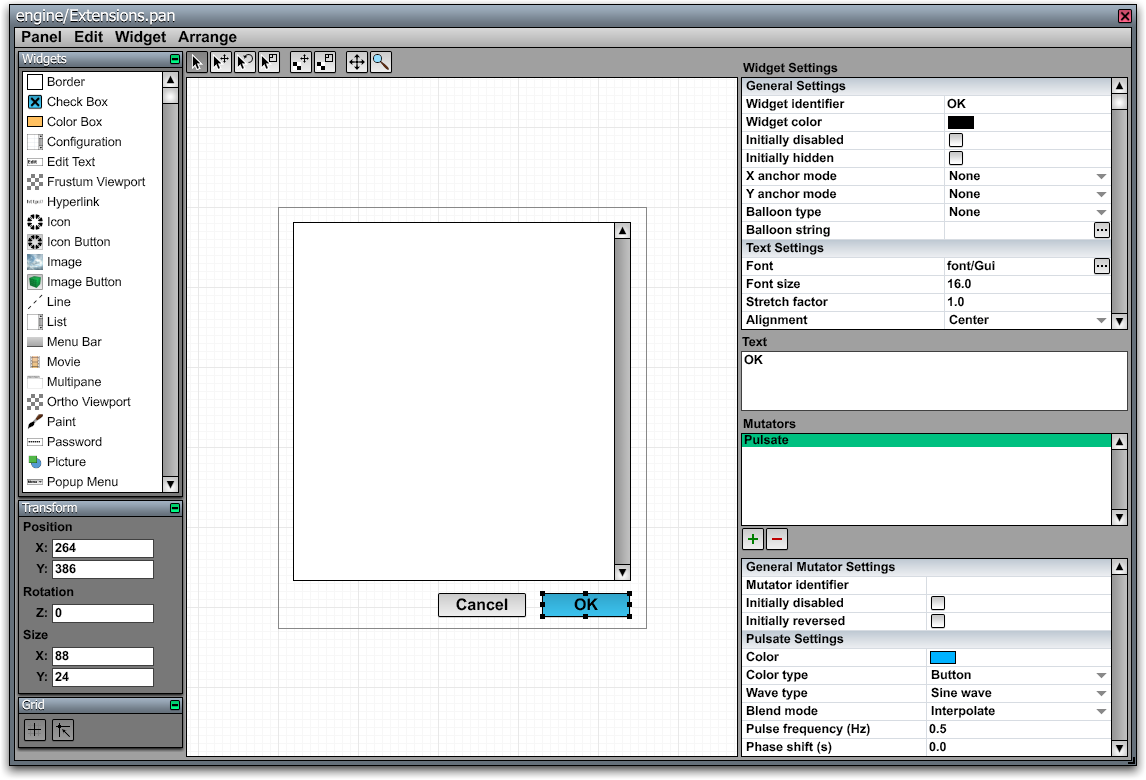 The Panel Editor, shown in the image to the right, is a tool included with the C4 Engine that is used to create and edit graphical user interfaces of two different types. First, the panel editor can be used to create windows, dialogs, and heads-up displays that are rendered on top of a game on a two-dimensional desktop, and these interfaces are saved in individual panel resource files. Second, the panel editor can be used to create interactive in-game interface panels that are saved as part of the world in which they exist.

An interface panel is composed of a set of widgets, and many different types of widgets, including simple text and image widgets and more complex widgets like list boxes, are built into the engine. Custom widget subclasses can be defined in the game code and registered with the engine so they appear in the Panel Editor.

Each widget can have one or more mutators attached to it that produce animations of various kinds. Widgets belonging to in-game interface panels can also have scripts attached to them that get executed when the user interacts with the widgets.

The dimensions, window title, and various flags for a desktop user interface panel are set by choosing Window Settings from the Panel menu.

After saving the panel, the created .pan file can then be used in your game with the Window class.

An interface panel can be created in the World Editor by using the Panel Effect tool in the Effects Page. When a panel effect is selected, the Panel Editor can be opened for it by choosing “Edit Script or Panel” from the Node menu, which has the shortcut Ctrl-E. The Panel Editor is also accessible from the Controller pane in the Node Info window.

The Panel Effect tool draws a rectangular region representing the boundary of the panel. When a panel is first created, it automatically has a Panel Controller assigned to it that can be accessed under the Controller pane in the Node Info window.

Under the Panel tab in the Node Info window, there are three check boxes that affect how the panel is rendered.

There are eight tool buttons at the top of the Panel Editor window, and they have the following uses. In addition to clicking on the tool button, some of these tools can also be selected by pressing the number key shown in the table.

The following table describes the individual pages that are currently available in the Panel Editor.

When one or more widgets are selected, their properties can be edited on the right side of the window. Different properties are shown depending on the types of the selected widgets, but all widgets have an identifier, a color, two flags indicating whether the widget is initially disabled or hidden, and settings for a help balloon. Settings that differ among multiple selected widgets are displayed in an indeterminate state until they are modified.

See the list of widgets for a description of the settings that are specific to each type of widget.