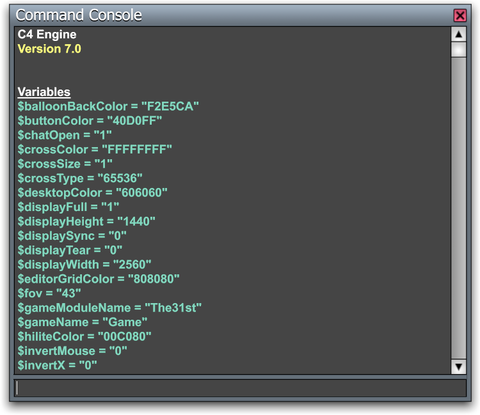 The Command Console window can be opened at any time by pressing the tilde/grave key. (On some non-English keyboards, the key directly below the Escape key should be used.) The window displays a command line and an output buffer as shown in the image to the right. If the C4 Engine was built using the debug settings, the window displays "(Debug)" to the right of the build number.

The console stores a small command history that can be accessed with the up and down arrow keys.

The following table describes some of the commands that are built into the engine. New commands can be added by an application or plugin module (see below).

The following commands are defined by the standard tools that ship with the C4 Engine. Most of these commands have equivalent items in the C4 Menu. If the name parameter is omitted from any of these commands, then a file picker dialog will appear to let you select a file.

Application modules and plugin modules can add their own commands to the engine by creating new instances of the Command class. The constructor for the Command class takes a command string and a pointer to an observer object that is invoked when the command is executed. For example, to define a command called explode that causes the MyClass::ExplodeFunction() function to be called, you would construct a new Command instance as follows.

Once the command has been constructed, it needs to be added to the engine's command list before it will be recognized. This is done by calling the Engine::AddCommand() function. Continuing the explode example, you would make the following call to add the explode command to the engine.

Destroying the Command instance automatically removes the command from the engine.

The observer event handling function assigned to a new command must have the following prototype.

When a command is entered into the console (or executed from a file), the observer event handler is invoked, and the text passed in through the text parameter provides the rest of the command line. For instance, the command explode 1 boom would cause the ExplodeFunction() function to be called with a pointer to the string "1 boom".

(The number 63 represents the maximum length of the string stored in the String object. This number can be omitted altogether to get an arbitrarily large string, but it causes extra memory allocations.)

If the Command Console window is later going to be enabled again, then it will also be necessary to save the previous console procedure so that it can be restored. This can be done by expanding the above code as follows:

To enable the Command Console window again and restore the previous console procedure in the Input Manager, use the following code: