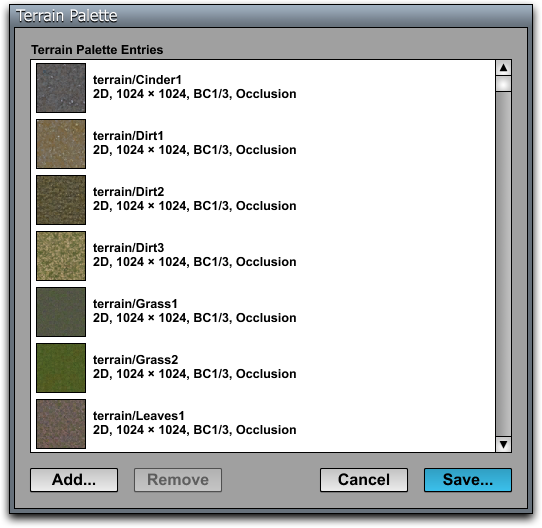 A terrain palette is created by selecting the Generate Terrain Palette command from the C4 Menu or by entering texpal in the Command Console. The Terrain Palette dialog (shown in Figure 1) then appears with an empty list of input texture maps. Texture maps are added to the palette by clicking the Add button and choosing the textures that you want to be part of the palette. Multiple texture maps can be added at once by holding the Shift key to choose multiple files from the file selection dialog that appears after you click the Add button.

Once you have added all of the texture maps that will be part of the terrain palette, click the Save button. You will then be asked to name the output texture resource containing your new palette.

The texture maps to be included in a terrain palette must satisfy the following requirements:

This information is shown for each entry in the list of input textures so that it's easy to spot problems.

The texpal command can also be used as a standalone command line tool. (The dialog appears when no parameters are specified.) The command has the following usage:

The output-name is the name of the output terrain palette file (without extension) relative to the Data directory. This name does include the top-level directory name in its path.

Each of the input-name identifiers must name an existing texture map resource using the standard resource naming conventions, meaning that the top-level directory name under the Data folder is not included in the path. Any number of input texture maps can be specified, but the number of entries should be kept as small as possible for best performance.