The C4 Engine contains a powerful scripting language that can be used to implement event sequences taking place in response to some kind of trigger in a world. A script does not require the use of any textual programming language. Instead, a script is shown as a graphical representation of the actions to be performed and their interdependencies. Scripts support local and global variables, conditional execution, loops, and expression evaluation.

For information about the use of expressions in scripts, see Expression Evaluation in Scripts.

Adding a Script to the World 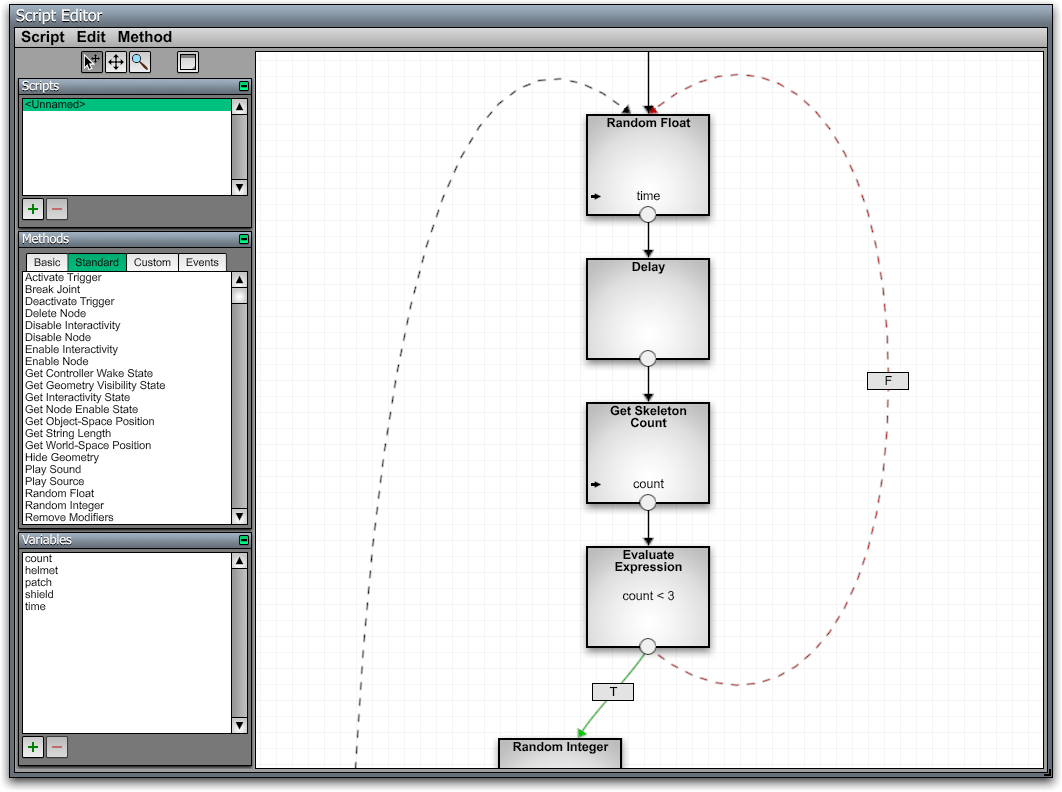 The image to the right shows the Script Editor. A script can be assigned to any node in a world and edited by attaching the script controller to it as follows.

A script can also be assigned to any item inside a panel effect. For more information, see Panel Editor.

An existing script can be edited by selecting a node and choosing Edit Script or Panel from the Node menu, or by just pressing Ctrl-E. You can also access the script by following the same steps above, except that the script controller will already be selected in the Node Info window.

A script controller can contain multiple scripts, and these are displayed in a list in the upper-left corner of the Script Editor. Each script can be configured to handle one or more different events that cause the script to be executed. When a specific event is send to a script controller, all of the scripts that can handle that event are executed.

Double-clicking on a script name opens the Script Info window, which displays the following settings.

A single script may perform different actions in response to different events by using the event methods available in the Script Editor.

A method is shown as a box in the Script Editor, and it represents a single action in the script. What a particular method actually does is determined by the C++ code that defines that method. The C++ code for many methods is built into the core engine, and the game code can implement new C++ code for any number of custom methods.

A fiber is a directed edge shown as a curve with an arrowhead at one end, and it represents the flow of execution from one method to another. The method from which the fiber starts is called the start method for the fiber, and the method to which the fiber points is called the finish method for the fiber. Each fiber possesses an execution mode that is one of the following values, and this mode controls conditional execution.

A fiber that represents a loop in the script is shown as a dashed curve. Looping fibers (also known as back edges) are detected automatically by the Script Editor and cannot be specified as looping or not looping by the user.

Multiple fibers leaving a particular method can be thought of as executing in parallel from a high-level perspective. Since they are actually executed serially at the low level in a cooperatively scheduled fashion, the edges representing control flow in a script are reminiscent of operating system fibers, and that is where they get their name. The order in which methods immediately succeeding a completed method are executed is unspecified, except for the restriction that all incoming non-looping fibers must be ready.

Methods are colored red in the case that the user creates a closed loop having no incoming fibers from methods not belonging to a cycle in the graph. Methods in such a loop can never be executed, so the red color provides an indication of dead code. This situation can be corrected by adding a null method to the graph and drawing a fiber between it and the first method that should execute in the loop.

When the Script Editor is opened for the first time for a particular node in a world or widget in a panel, the script viewport is blank. New methods can be added to the script by selecting them from the lists and clicking in the viewport. The editor won't let you place two methods on top of each other, and the cursor will change to indicate where it's possible to place a new method.

Fibers are added to a script by clicking inside the circle at the bottom of any method and dragging into another method. This causes a new fiber to be created beginning at the method you clicked on and ending at the method inside which the mouse was released. You cannot create multiple fibers between the same two methods. The execution mode of a fiber can be changed by selecting the Cycle Fiber Condition command from the Script menu or using the shortcut Ctrl-F.

The physical position of a method in the viewport is irrelevant. The execution flow structure of a script is determined entirely by the fiber connections. Methods may be placed in any convenient location.

There are four tool buttons in the upper-left corner of the Script Editor window, and they have the following uses. In addition to clicking on the tool button, each of these tools can also be selected by pressing the shortcut number key as shown in the table. (The shortcuts were chosen to be the same as the corresponding tools in the World Editor.)

Once a target node has been selected for a method, it is displayed in parentheses under the method's name in the script viewport.

If a method is of type "Call Controller Function", then a list of available controller functions for the selected target node is displayed on the left side of the Method Info window. Once a function is selected, its configurable settings are displayed in the list on the right side of the window. If a function outputs a value, then a field for designating an output variable also appears in the lower-left corner of the window.

For a description of the functions made available by the built-in controllers, see Functions.

If a method is of type "Change Settings", then a list of setting categories for the object referenced by the selected target node is displayed on the left side of the Method Info window. (Most nodes types have only one category.) Once a category is selected, the object's configurable settings are displayed in the list on the right side of the window. Any settings that are shown to be in an indeterminant state are not affected when the method is executed. All of the settings can be reset into the indeterminant state by clicking the Clear Settings button.

If a method is of type "Evaluate Expression", then an expression can be entered in the Method Info window. See Expression Evaluation in Scripts for more information about expressions.

A script may define any number of variables, each having one of the following types.

After a variable is created, it can be changed by double-clicking on it in the variable list.

The value of a variable is used as an input for a method by entering the variable's name under the “Input Variables” column for a particular setting in the Method Info box. If the variable's type does not match the expected type for the setting, then its value is implicitly converted to the needed type.